The following interview is the first part of my 6,000 word interview with Lou on December 10, 2019 at his home in Oakmont.  It provides insight into his early interest in architecture and helps explain the misconception surrounding his first, iconic, and most famous building: Capitol Records in Hollywood. 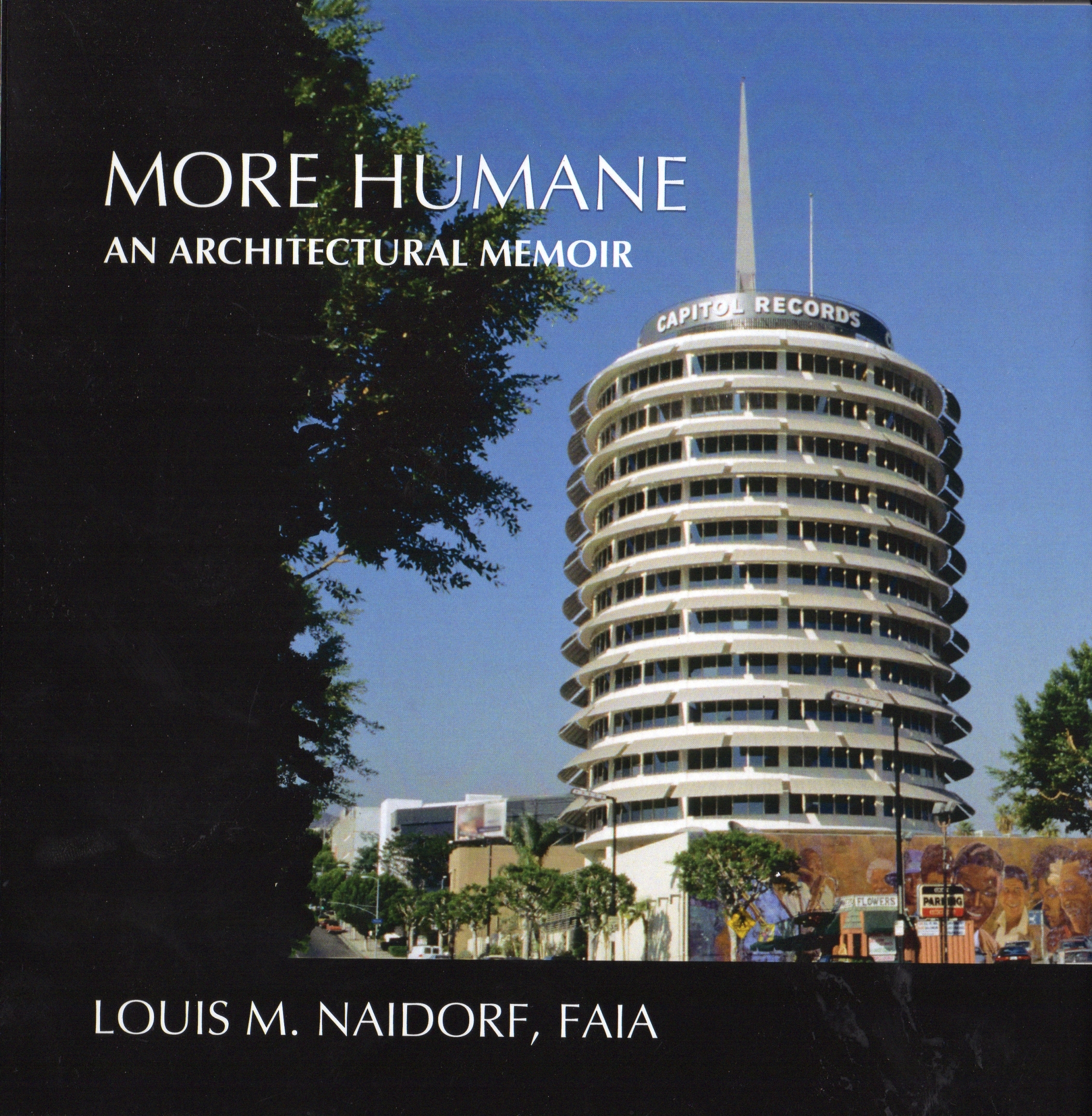 O:        I am here with Lou Naidorf and we are seated in a very nicely finished seating area of his house – this makes sense since he’s such an accomplished architect.

L:         I was conceived in New York, almost aborted in the Caribbean, and popped out in Los Angeles.  It wasn’t as far back as Father Junipero Serra travelling north but it was quite a while ago.  I went to John Marshall High School which was noted for its debate team and its singular failure at football.  I attended UC Berkeley in 1946 through 1950 when I left with a master’s degree.

L:         Well, I had been married 2 years, had no money at all, and drove a dilapidated ’34 Ford with my wife, a fishbowl, and the few clothes we had to Los Angeles.  William Wurster had just taken over the architectural program at UCB and had lined up 5 interviews with LA firms for me.  The first was Bob Alexander’s firm but I didn’t want to work in downtown LA.  Next on the list was Welton Becket.  I was flat broke, had enough gas to drive to the interview and was desperate to get a job.  He offered me $1.75 an hour which I gladly accepted and told my wife we were solvent.  My intention was to work there a few years…  It was a crazy time in architecture.  I hadn’t paid attention to the fact that a whole generation of architects had been lost.  When I got to the office I realized it was comprised of all senior people who were 20 to 25 years older than I was – I was 21 at the time – they had perhaps 3 or a few more years more experience than I did – when the depression hit all work stopped – only the movie studios had work for architects – it was the only game in town.  These guys had been trained in the Beaux Arts – they had talent, were capable, and worked at warp speed but said “you, copy.”  They didn’t know what to do with the young kids who had come out of UCB or USC in LA in the late 1940s and early 1950s.  Clearly all the classical training created very little precedent.  Architects like Le Corbusier and Mies van der Rohe still had projects that hadn’t been done – there were scattered fragments because the depression started in Europe before it did here.  Then World War II happened.

O:        Was Welton Becket the only architect you worked for?

L:         I didn’t really make a decision.  I always wanted to be an architect but didn’t know what it was called.  When I was in kindergarten or 1st grade the school was housed in a damaged unreinforced brick building so we had classes in a tent while a new reinforced concrete school was being built.  The site was fenced in and I could peak at it but finally the fence was taken down. I was drawn to it as a moth is to a flame.  It was 1934 and I was 6 years old and wandered into the building.  A fellow was starting to hang a door – he had a ratchet screwdriver – which I had never seen before.  He asked me which screw should he put in first? I answered “the top one” – Okay, what next?  Then the one in the bottom and then the middle one.  He said “You’re OK.”  That’s my first sharp memory of architecture.  The central thing I took away was that things don’t just occur – they had to be designed, conceived, and documented in some way.

Teachers then were bland, deliberately sexless creatures but in 3rd grade I had a teacher who was a delightful woman – she wore a hibiscus in her hair and was a lush blonde.  She was happy, ebullient – wasn’t married – every summer she went to Hawaii with a different man – she clearly was a free spirit.  She decorated the classroom with a  Hawaiian theme and hung up the plans of the Lurline Cruise freighter which went back and forth to the islands.  I was 8 years old at the time and was fascinated by these plans.  I asked who made these and was told naval architects.  What about houses?  Architects.  She said have your mother show you the real estate section of the newspaper – you’ll see floor plans of houses.  I had an epiphany – things aren’t just there. They had to be designed.

I always work in plan first – the elevations and sections come last.

L:         When I started at Becket’s office there were about 90 on staff.  I remember my first  assignment was to do the tray slide for the cafeteria in the UCLA Medical Center.  Later on I did fancier projects.  George Haslin, the director of design, came out of the studios. Later he started the drafting program for Cal Poly San Luis Obispo with 18 students.  Another guy, Maynard Woodard came on board.  The firm’s goal was to hire the best.  Welton had no design ability whatsoever but loved architecture and was passionate about it.  He hired the best people and then left them alone.  If he made money on a job or didn’t depended on the fees he negotiated.  He had an incredibly ethical practice – he was quite wealthy – the house he was building at the time for himself had Art Linkletter on one side and Lauren Bacall and Humphrey Bogart on the other.  Fancy enough.

As a young designer Maynard Woodard had worked in the studios where the whole  design approach was to copy, but he hated the jargon  – he’d gotten licensed only 2 or 3  years before and then I got licensed 2 years later and got to work on a large scale.  It was a crazy time.  There were not enough architects to do the flood of work available.  The young people by force of circumstance took over.  On my first major project I had no idea who the client was – I was told it was a small building with a height limit of 13 stories on a side street – The end design had nothing to do with records – it was based on a design I did for my graduate thesis when I was at Cal.  The owner had demanded confidentiality on the project – he was a conservative businessman named Clyde Wallich who owned Music City.  The program requirements included recording studios.  When he looked at the design, he complained that it looked like a cheap advertising stunt and that he’d look like his goddamn brother.  Becket calmed him down and said we’ll do a rectangular building like any other architect would have said they’d do – a nice little pleasant rectangular building.  Becket went on to say that he really liked the round building – he supported his design staff – I didn’t have the sophistication to deal with this guy who was blustering and shouting at me.  Becket then told Wallich you’ll be dealing with the insurance company and the bank for financing – they’re very conservative –so we’ll make a couple of models – one for the rectangular and one for the round – and we’ll make a few cases to house them so you can show them to the insurance company and the bank.  We’ll provide some statistics – the round one will cost less – and you can get their opinion.  They won’t do anything foolish – remember you bought a lot 2/3 up a street but not on Hollywood Blvd.  He then added, do the round one because it’ll be best for leasing out the spaces you aren’t occupying.

Wallich came back a few weeks later and shared what transpired with the insurance  company.  He told them he didn’t want to be laughed at and they responded that given the location, a side street, not a main thoroughfare, you’ll need a hook.  You won’t be          laughed at but rather talked about – do the round one.  It’ll be good for leasing.  So sometimes architects have the sense that they have a magical concept as in Ayn Rand’s  notion of the “Creator” – If it hadn’t been for an anonymous insurance agent (who bought into the concept) there’d be a plain ugly building on the site.

O:        That’s very interesting and as with the article Helena gave you from The New Yorker – in spite of what you say, people insist that it must be a stack of records.

L:         If it had been an IHOP people would say it’s a stack of pancakes or if it had been for the   Firestone headquarters it’d be a stack of tires piled up…Beyond that…a pile of dishes, and so on.

It’s hard to look back on the 1950s – mid-century modern and all – but there was a groping for direction – precedents were few and we were making it up out of whole cloth in a way.  Maynard Woodard was hooked on Bunshaft’s work at SOM – he was trained to copy – but at least he copied good design stuff.  He did knock off work of what SOM did but a few of us were left alone and he left me alone – I don’t know why – I don’t think I have any particular talent but I came from a strong intellectual line so I arrive at projects after intensely looking for some logic in the solution – and the issues that make it up are answers as an approach.  That’s obviously not enough so then at that point it needs to have that fire breath of life put into it which is a poetic extrapolation of the logical into something grand.  It sometimes happens, but once in a while it simply doesn’t.