Between Order and Chaos

This Journal entry is a repost of the original December 1, 2017 entry.

This post is part of an ongoing (although intermittent) series of fictional chats between an architect and an intern in the architect’s Northern California studio. 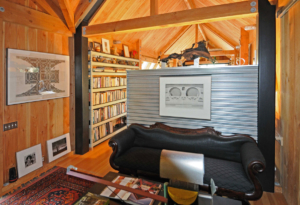 I.        I  was  thinking  about  chocolate ice cream in my freezer last night and  how in our studio we  usually don’t champion any one way of doing things. We usually try to at least think about the merits of opposing ways of seeing the world…

A.         I used to find it interesting that  a design  problem could so often be  solved  by approaching it from diametrically opposed positions.  For example, if a form works well elongated in the north south direction it can be eye opening to force oneself to consider the merits, the pros and cons, of elongating it in the east west direction.  I say “used to” because over the years I’ve come to try not to look at the world in such a segmented way – now things seem to be part of some amorphous smear on a continuous Cartesian grid with our conception of right and wrong,  order and chaos,  black and white –  in continuous motion –  moving, changing and evolving through time…countless variations affected by countless nuances.

I.         That’s pretty weird, pretty ethereal; what about the value of a clear crisp statement?  That would be nice for the builder to hear, wouldn’t it?  It wouldn’t be bad for me to hear either.

A.        Clear crisp statements are necessary for decisive actions, but inevitably ignore the nuances that provide much life and color. So anything too definitive may be ideal at the moment, but maybe not so ideal at the next moment.  Does the phrase “the slow ones now will later be fast” ring a bell?

I.         No, but I get defining ourselves and setting some markers or guide posts for the future so we can judge how we’re doing with life and work.

A.        A narrow mindset, viewing the world with blinders, may be good in some instances, but it is almost certainly not the end-all.  Those that would have you believe otherwise are probably short on vision and just don’t know any better.

I.        Do you think we’re even on the same page? How do you square all this with our need for cultural diversity?

A.        Well, in this century you could easily argue in favor of less diversity. I don’t think  we are short on diversity.  It’s popular today to advocate human diversity and the explanation goes something like diversity is good because that is what the U.S. population has been made up of for the last three hundred years. Then the narrative stops –  no real analysis, no depth, no  downside …so here are a couple things to consider:

First, diversity without order or control can quickly devolve into chaos.   I’m not sure there was much less diversity back then than there is today, but it’s much easier to have a strong, unified society with less diversity.  Here also unity can devolve into rigidity and an inability to adapt to changing conditions.  Obviously there is a Goldilocks zone between unity and diversity that serves the greatest good at any one time.  In architecture I think of these polarized states as order and   chaos.

Second, assume we champion even more diversity of humanity.  Why are we doing so?  Just to be doing it?  The good and the bad? Do we also champion and encourage diversity of life itself? Do we have empathy for the other inhabitants of the planet and champion diversity and sufficient habitat for all species?

I.        Do you mean animals like birds and banana slugs?  What about plants?

A.        I’d say diversity of life is more important than diversity of culture and the total array of life seems to be on a downward path.  The human diversity I’m talking about is tied to immigration and the addition of more people adds to a population that is already overburdened.  Our resources are dwindling, our quality of life is diminishing, native species are being marginalized and pushed to the brink of extinction, pollution is everywhere – the list goes on and on. We are already sufficiently diverse to assure a good mix of our gene pool and more people mean \more problems. A doubling of the American population would result in a very different America.  The land would become one giant food processing system, cities merged together, regulations would greatly increase, and wildlife habitats would be reduced to a series of parks and preserves.

I.        Back before we skipped pages – whatever happened to order and chaos in architecture?

A.       You’re the one who raised the issue, but it’s all pretty much the same thing.  It’s    finding that zone where neither more order nor more chaos improves things.  In architectural practice we’re usually lucky if we can find a solution  reasonably close to the zone and depending on the circumstances the zone may be anywhere   between these polar extremes.

I.        How do you form these thoughts?  Do you feel them intuitively or have you thought them through analytically?

A.        It’s pretty much a combination of both, but the passion comes from deep within and I sense that my insight comes from a pretty good place  – it’s a broad view from beyond the foibles of the human menagerie…insightful probably, but a fit for today’s reality probably not.